A child is not a miniature adult

It was this realization and an interest in improving the then dismal outcomes of children undergoing surgery that led to the separation of paediatric surgery from General Surgery. At that time, in the 1960s, this was certainly a very challenging job. Creation of an entire department from scratch, and building up a complete floor, with a totally self-sufficient super-specialty, to establishment of an MCI-recognised post-graduate course in paediatric surgery, was no small achievement.

Prior to 1967: Humble beginnings

Prior to 1962, all children were admitted and operated in the department of General Surgery. There was no separate Paediatric Surgery ward, ICU or OT. In 1963, a beginning was made in the direction of setting up the specialty, by appointing Dr RK Gandhi as Honorary Lecturer in Paediatric Surgery under Prof. Sen. At that time, 5 beds were given to Dr. Gandhi in ward 5 (in General Surgery), and he started looking after all the paediatric work. Later, the number of beds was increased, and patients were scattered over different wards.

By 1967, these commendable efforts led to Paediatric Surgery becoming firmly entrenched as a separate specialty and a full-fledged department was created by committing all paediatric surgical beds to the care of Dr RKG, who was appointed as Honorary Professor and Head of Paediatric Surgery.

Department of Paediatric Surgery was started. Dr RKG was professor and HOD. Dr Snehalata Deshmukh (SSD) was Lecturer. Pediatric Surgery Ward was located above JMT on second floor. Later on additional beds were given in Ward No 2 on ground floor. From 1970, newly created Ward 3 became the ward for paediatric surgical patients. It was built with great efforts on the 3 rd floor terrace of Gynaecology wing (also known as N.A. Purandare wing) just above the postnatal ward (14A). Initially, only 12 beds were allotted, which were gradually increased to 18, then 20, then 24 beds. Now, there are 50 beds allotted to ward 3.

There was no separate dedicated OT and ICU. A small room at the entry of ward was used as a temporary ICU. JMT OT (General Surgery OT on 1st floor) was used for Paediatric Surgery cases till 1982. There was no lift till ward 3. It was only up to the second floor. The only access to ward 3 was via a narrow staircase beside the lift. Patients were physically shifted up and down the staircase as no trolley could be pushed till there.

There were three OTs constructed. Two OTs were used daily for cases under anaesthesia. 3rd OT was used for endoscopies and as septic OT. At this time, the lift was extended to come up to ward 3 on the third floor. The ICU had Omega incubators with trolley. Luschko and Birds were the first ventilators in ICU. Luschko was imported from Amsterdam. At that time, Dr. Anil Tendolkar, from department of cardiovascular surgery, taught the residents how to use the Birds’ ventilator. Right at that time, there was auto door closure system in 3ICU so as to reduce the chances of infection. The entire renovated complex provided a complete setup for management    of Paediatric surgical conditions.

1986  The first test tube baby of Mumbai, delivered by Dr Indira Hinduja in KEM hospital, Ms. Harsha Chawda, was kept in this very 3ICU in 1986. She developed acquired rectovestibular fistula which was successfully treated in ward 3 ICU. 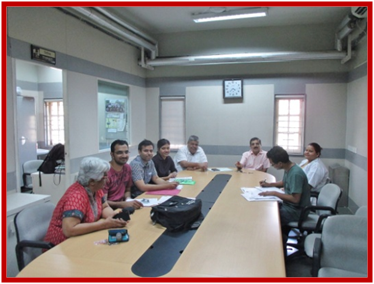 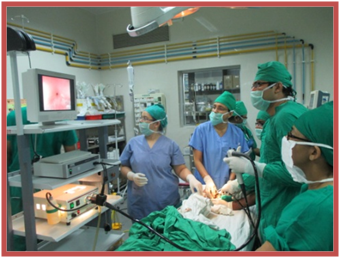 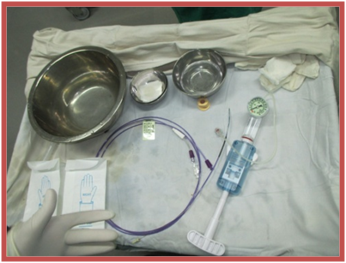 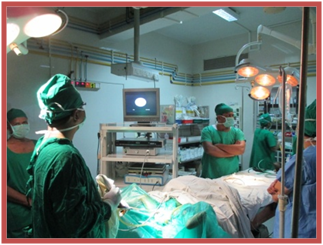 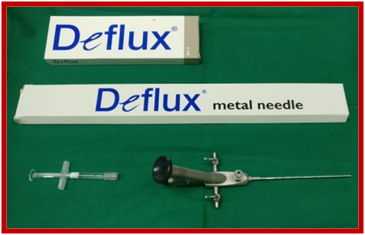 Visit of Director (ME & MH) to inspect modular OT Holmium YAG laser for paediatric use

The department of Paediatric Surgery has a ward with a capacity of 50 beds – including an eight-bed intensive care unit and a dedicated operation theatre complex with an endoscopy room. The department deals with a wide spectrum of cases below the age of twelve years.

Both emergency and elective cases are seen; the referrals being from private practitioners, school health clinics, outpatient clinics, peripheral primary and secondary health care centres and from the Departments of Paediatrics and Neonatology. Regional patients form neighbouring states are also treated in the department.

The department provides emergency services daily with residents  available on the floor round the clock. The department runs out patient clinics twice a week on Tuesday and Thursday at 1:30pm in OPD 11 on the ground floor Multistory Building. Every Thursday at 2.30 pm, a speciality multi-disciplinary Birth defect Clinic has been started , where couples with antenatal scan showing anomalies are jointly counseled.

The department runs two operation theatres five days a week. The total surgeries performed annually are about 2000; 800 of which are major operations. Routine upper G. I. Endoscopies, bronchoscopies and cystoscopies are done regularly.

The department runs a superspecialty M. Ch. course in Paediatric Surgery for which post-MS or post-DNB General Surgery candidates are enrolled every year (recognized by Medical Council of India (MCI) and Maharashtra University Of Health sciences[MUHS]). The department undertakes teaching of undergraduate and postgraduate students. A specialised paediatric surgical and general nurses’ training is also undertaken.
The department has a well equipped library with all standard reference books, video cassettes, ebooks and slides. Journal Club is regularly conducted.
The department has an independent seminar hall and conducts regular clinical meetings, which are attended by surgeons from many hospitals in Mumbai.
Research work carried out by the department includes publication and analysis of rare case reports and other articles in international journals.
We have started fellowship in minimal access surgery in pediatric surgery, a 1-year course recognised by MUHS, for 2 candidates per year post M. Ch or DNB in pediatric surgery. Till date, 8 fellows have already been trained; 2 further are undergoing their fellowship.

The department of Paediatric surgery at Seth G S Medical College and K. E. M. Hospital over the years has achieved a high degree of sophistication under the ever watchful eyes of Dr. S.V.Parelkar (Professor and Head) and his team. This is mainly based on

Training of pediatric surgeons in minimal invasive surgery through the MUHS conducted fellowship. Advanced laparoscopic and thoracoscopic surgeries will be aided by latest acquisition of 3 – D Laparoscope.

TOWARDS A MINIMALLY INVASIVE MILLENIUM:

There has been a changing trend in the field of Paediatric surgery with Minimally Invasive Surgery playing a bigger role in the management of surgery of children. Instrumentation is improving and also the skills need to be acquired and augmented to enable safe surgery through a laparoscope in smaller babies, even neonates.

Both thoracic and abdominal ailments are being treated by minimal invasive surgery and a wide range of basic and advanced surgical procedures are being carried out from newboens till 12 years age.

FOETUS AS A PATIENT:

“NEW ERA” of widespread screening of the unborn child by ultrasound (USG) with planned intrauterine, intrapartum and immediate postpartum interventions. With the development of sophisticated ultrasonographic imaging and fetal sampling techniques, a growing number of fetal disorders are amenable to surgical manipulation. This is undertaken at a very few selective centres.

With the widespread availability of robotic surgical systems, it is natural for advanced paediatric surgical reconstructive surgeries to be carried out by using such systems. The department plans to procure a robot for all such procedures which will greatly benefit these children.

The department has performed bilateral Laparoscopic cortex sparing adrenelectomy for pheochromocytoma with von-Hippel-Lindau syndrome in 10yr boy.Aim was to save the adrenal cortex and avoid addisonian state in the child . The department has recently successfully performed a laparoscopic partial splenectomy in a 10 year girl with a benign splenic cyst. clinically a mobile lump in the LHC 10x8cm was palpable. USG and CT were suggestive of a splenic cyst with peripheral calcification arising from the lower pole. Laparoscopy was done under GA in supine position with 4 ports. the lower polar vessels were clipped and a good line of demarcation had formed. We then used the harmonic scalpel to divide the spleen along the line of demarcation and removed the specimen through  a small pfannensteil incision. The histopathology came as epidermoid cyst. Patient had an uneventful recovery.

The department has successfully performed thoracoscopic repairs of congenital diaphragmatic hernia and eventration of diaphragm.The youngest child was 15 days old and the oldest 1.5 years.

We have recently done a retroperitoneoscopic nephrectomy for a non-functioning kidney secondary to pelvi-ureteric obstruction in a six-year-old boy. It was done with the patient in the prone position with only 2 ports – one for the camera and the other for the instrument port. This is a relatively new technique, SIMPL stands for Single Instrument Port Laparoscopy. Thus the entire procedure is done through only one working port and there are only 2 small incisions on the back. 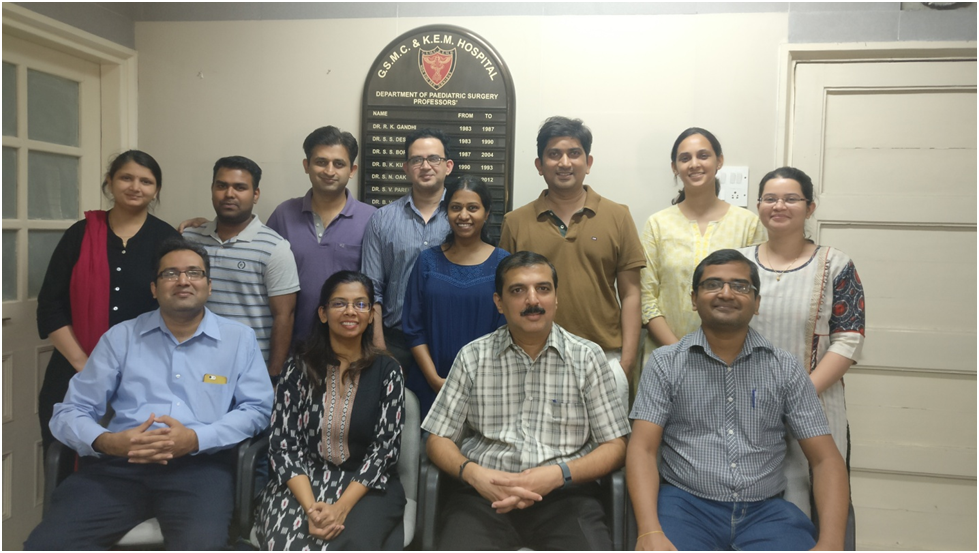 Copies of journals to  be emailed to all 1 wk in advance.

Attendance is mandatory to residents.

Faculties are encouraged & appreciated for participation.

Ward 3, 3ICU and Paediatric OT are all on the third floor Old Building, in the Gynaecology block, above the labour ward.